The Deck of Many Things and Many Fates 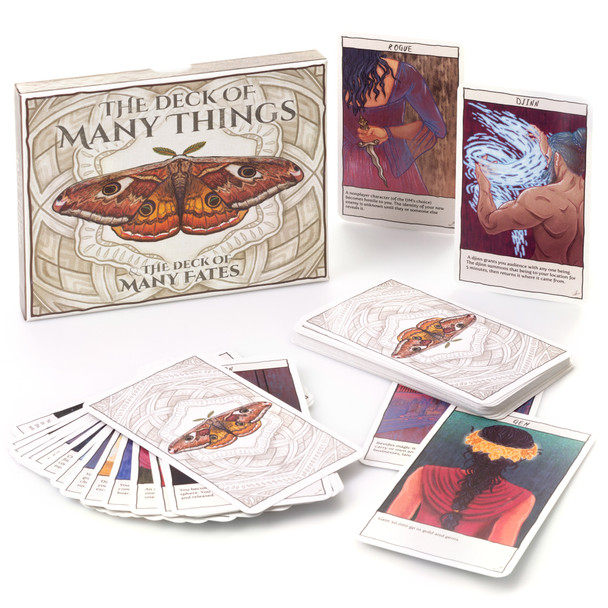 The Deck of Many Things and Many Fates

All dungeon masters, veteran and novice alike, have heard the legends of the Deck of Many Things. A treasured artifact which can infuse any campaign with danger, wonder, and delight. But look here: another deck has emerged from behind the veil of mystery. A deck equal in power, yet bursting with epic confrontations and sinister secrets. The Deck of Many Fates.

Comprised of two decks totaling 49 jumbo-size tarot cards, The Deck of Many Things and the Deck of Many Fates are the perfect accessory for your adventuring party. Our finest sages have also included a guide on the use of these cards, as irresponsible operation may lead to disfigurement, death, and worse.

The Deck of Many Things has been an RPG mainstay for over 40 years. It is an artifact of immense power and extreme chaos. Twenty-two cards each contain a strange, potent, and often game-changing effect. Perhaps you shall draw the fabled Flame card, and with it the enmity of a powerful nemesis. Or, just as likely, you may draw the Gem card, blessing you with immense wealth.

The Deck of Many Things and the Deck of Many Fates includes 49 jumbo tarot cards, sized at 120mm x 70mm (~4.75" x 2.75") in two hand-illustrated tuck boxes, and helpful instructions for use and play.

MSRP:
each Now: $3.99
Was:
A single deck of sealed Aviator cards in either red or blue. Originally introduced back in 1927 to commemorate Charles Lindbergh's Trans-Atlantic flight aboard the Spirit of St. Louis, Aviator...

MSRP:
each Now: $3.99
Was:
A single deck of sealed Bicycle playing cards in either red or blue. Do you remember learning your first card game? How about winning at an old fashioned game of solitaire? Or that holiday tradition...

MSRP:
each Now: $18.99
Was:
Never miss a modifier again! With the Pathfinder Condition Card Deck, it's easy for players and GMs to keep track of the Second Edition Pathfinder RPG's most common conditions. Are you sickened by a...

MSRP:
each Now: $7.40
Was:
Easy to learn and fun to play, Euchre offers both beginners and experienced players the opportunity to develop valuable card-playing strategy and techniques.Euchre is uniquely American, created by...

MSRP:
each Now: $7.40
Was:
The Bicycle® Rummy 2-Pack Set is always a household hit. Basic Rummy is so simple to learn that everybody can play. Kids have a great time while they're learning basic math, concentration and social...

MSRP:
each Now: $24.98
Was:
A Dungeon Master's Essential Tool As game master, or dungeon master, you control every aspect of your campaign right down to the most minute of details. So why can't you control your GM screen? Free...

MSRP:
each Now: $19.98
Was:
Adventure is Objective All too often we're struck scrawling tavern tables, pillars, and bushes onto our D&D map tiles. But you? You know that objects make up the world, and not the other way...

MSRP:
each Now: $34.98
Was:
Fake Monsters, Real Loot The adventurers have made their way through the Swamp of Suffering, slain Thraxis the Green Dragon, and finally kneel at the throne of Prince Darius. Back in the day, you...

MSRP:
each Now: $30.99
Was:
Never Borrow Dice Again! The Wiz Dice Bag of Holding is back and better than ever. Still inspired by the classic Crown Royal bag with a capacity of over 200 polyhedrals, the Bag of Devouring is a...

MSRP:
each Now: $14.98
Was:
The Best New Way to Track Your Character's HP The Bad News: a Basilisk took a bite out of you. Your health drops to 14, you're poisoned, your next roll is at -1, and the margins of your character...

MSRP:
each Now: $41.98
Was:
Open the Vault! “The dragon is slain, and will trouble the kingdom no more. The king, in his gratitude, offers you a chest laden with coins of precious metals. The party’s fighter lifts...

MSRP:
each Now: $23.98
Was:
Can You Resist? We journeyed all the way to the Dreamlands to capture these five unique dual-color swirls and bring them back to you! Our 2-color process blends two gorgeous colors into a unique set...