Beetle is a simple but creative dice game of rolling and drawing.

In turn, players roll a die to determine which body part of a beetle (or bug or cootie) they are allowed to draw. The first player to finish drawing their beetle wins.

One  6-sided die
Pencil and paper for each player

How to Play Beetle

Randomly choose a player to begin. That player picks up the die and rolls it. They then draw a body part of a bug on their paper depending on the number rolled.

Once a player has rolled the die and has drawn any beetle parts, they pass the die clockwise to the next player who then takes a turn.

Play continues in this manner until somebody wins the game.

A completed beetle will have a body, a head, two antennae, two eyes, six legs, and a tail. The first player to draw all parts of their beetle is the winner. 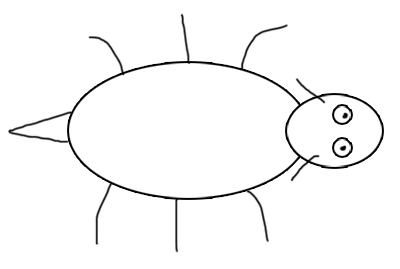 Each time a player rolls the number of a beetle part they can actually draw, they draw that part and then roll again. A player may continue rolling as long as they successfully roll body parts that they are allowed to draw.

Each player rolls two 6-sided dice on their turn instead of one and uses the result on each die.

Each player scores 1 point for every body part that they draw. Track scores over a series of games, and the first player to reach a predetermined score (e.g., 30 points) is the winner.

Before the game begins, decide on a more complex beetle to draw. For example, a beetle could have three body segments with four legs on each segment. Or it could have two heads, or six eyes, or four antennae, or any other combination and quantity of body parts.

Also, you can change the body part that corresponds with each number. For example, 5 could be for wings instead of antennae.