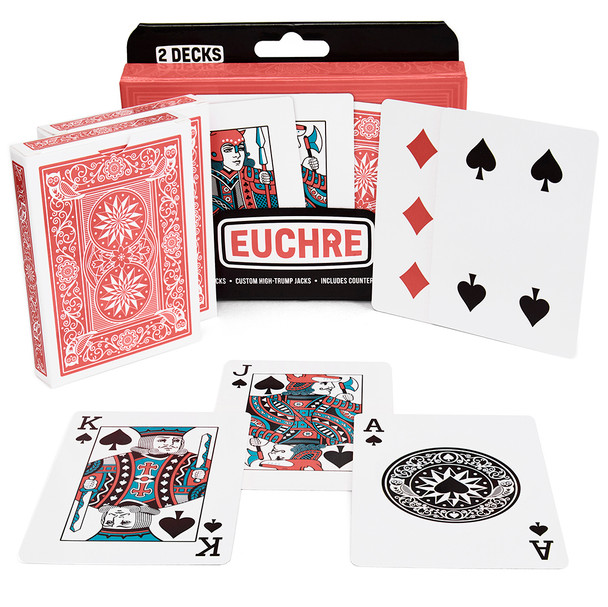 Trump Up Your Euchre Games

A timeless classic with over a century of history, Euchre's American roots lie in the Pennsylvania Dutch, who immigrated from northern Europe in the 1860s. These pre-stripped 33-card decks are purpose-built for playing many varieties of Euchre. Seasoned players and newbies alike will love the four custom high-trump Bower Jacks, stylized as Scandinavian folk warriors to reinforce their unbeatable position. This German folk art inflection is carried throughout our card aesthetic as a nod to the game's roots.

Why You'll Love It

Included in this dual-deck value pack are two sets of blank counter cards for keeping score -- no pen or paper required! -- and instructions for both classic American Euchre as well as the 32-card 6-player variant. We've also included a Joker for additional spicy variant games.

MSRP:
Now: $8.98
Was:
Need More Bridge? These scorecards will do the trick! We've included all the standard fixins: individual player scoring, rubbers, and tall We/They columns with an above/below line. Elegantly...

MSRP:
Now: $12.98
Was:
RPG character sheets are a beautiful thing, making sense of tabletop madness. But once you start leveling up, adding skills and collecting loot, your sheet starts to look mighty cramped. And when...

MSRP:
Now: $14.99
Was:
This set contains 125 durable, laminated cards for a range of deadly monsters of challenge rating 6–16. With game statistics on one side and evocative art on the other, they are the perfect...

MSRP:
Now: $23.99
Was:
193 durable, laminated cards for a range of deadly monsters of Challenge Rating 0 to 5. With game statistics on one side and evocative art on the other they are the perfect tool to help Dungeon...

MSRP:
Now: $0.55
Was:
This is a bright red 10-sided die with white numbers, manufactured by Chessex. It's a great basic die for all of your 10-sided dice needs, and it'll really hold up over time since it's made of sturdy...

MSRP:
Now: $0.27
Was:
A sturdy, bright yellow die with squared corners and indented black painted dots. Excellent manufacturing quality. Measuring in at 16mm, this is the most common size of dice. Also sold in bulk...

MSRP:
Now: $0.27
Was:
A bright white, high-quality die with dark black spots. Squared corners with indented painted dots. A favorite size and shape among tabletop gamers of all types, 16mm is the most common size of dice...

MSRP:
Now: $0.27
Was:
A bright green die with squared corners and indented white painted dots. The manufacturing quality on these dice is exceptional. A favorite size and shape among game players, this die measures 16mm...

MSRP:
Now: $0.27
Was:
This high-quality die black die has squared corners with indented white painted dots, making it exceptionally easy to read even at a distance. A favorite size and shape among game players. Measuring...

MSRP:
Now: $0.18
Was:
A small, bright white, high-quality 12mm die with squared corners and dark black spots. This die is a bit smaller than standard 16mm dice but large enough to use for a variety of games. Also sold in...

MSRP:
Now: $0.18
Was:
A solid red die with squared corners and white spots. The 12mm size makes it easy to roll in a small space, but it's plenty big enough to be used for all kinds of games or other dice-related...