The world of Dungeons & Dragons is full of amazing creatures, incredible stories, and incredible dice. But how much do you really know about these little polyhedrons that can make or break your character's fate? Here are eight random but fascinating facts about D&D dice and the game that made them popular:

When the original version of Dungeons & Dragons released in 1974, polyhedral dice were a rare commodity. There were only a few companies that manufactured such dice and they were difficult to find. This was because no one had ever thought to use all these dice for games before, so they were mostly being sold in small quantities for purely educational purposes.

Also, the wargames that D&D grew out of primarily used 6-sided dice for random number generation, so the early D&D game mechanics made heavy use of 6-sided dice as well. In fact, even though some polyhedral dice were incorporated into the game right away, 10-sided dice weren't used at all in the earliest editions because that die wasn't invented until 1980! Even the famous 1977 Basic Set only included five dice: a d4, d6, d8, d12 and a d20.

The d20s that were being produced in the early 1970s didn't show the numbers from 1 to 20 like modern d20s do. Instead they showed the numbers 0 through 9 twice. So then how were numbers between 10 and 20 generated? There were two methods.

The second method used for generating numbers 1 through 20 was to break out the crayons and color in the numbers on the die yourself. One color would be used to indicate one set of numbers 1 through 9, and another color was used for the other set of numbers. Then you just had to specify which color indicated numbers that were ten higher than what was rolled. Easy! (Well, maybe not so much...)

In fact, many of the early sets of D&D dice were unpainted and required you to color in the numbers on all of the dice yourself.

3. Some versions of D&D used cardboard tokens instead of dice

Because of the unexpected popularity of early editions of Dungeons & Dragons, TSR (the publisher of D&D) found themselves unable to obtain enough dice to keep up with demand. This forced them for a time to include 90 cardboard “chits” in their boxed sets that could then be used in place of polyhedral dice for random number generation.

But these weren't fancy tokens printed on heavy cardstock. Oh no. These were flimsy, laminated tokens that you had to cut out yourself.

Here are some instructions from one of the D&D boxed sets on how to use the chits:

“To use the numbered chits, cut off the laminated portion of the back cover fold-out, and then carefully cut along the lines dividing the chits. You should have 90 cardboard chits. Notice that they are printed in two different groups: 1 to 4, 1 to 6, 1 to 8, 1 to 10 (two sets) 1 to 12, and 1 to 20 (two sets). These duplicate the various dice-types used in the game.

To use the chits, place each different type in a small container (perhaps a small paper cup), and each time a number generation is called for, draw a chit at random from the appropriate container. Be sure to return the first chit before another draw is required. In this manner, any of the required die rolls can be easily duplicated. If a percentage roll is indicated, simply draw from the 1 to 10 chits two times, treating the chit printed "10" as "0" , so any number from 01 through 100 or "00" can be generated.”

The 4-sided die is notoriously nicknamed “The Caltrop.” Why? Because of its similarity in shape to the ancient weapon known as a caltrop, which is a spiky piece of metal that is shaped so that one point is always facing up when it is thrown on the ground. And while the 4-sided dice isn't technically a weapon, it's best to avoid stepping or sitting on one! 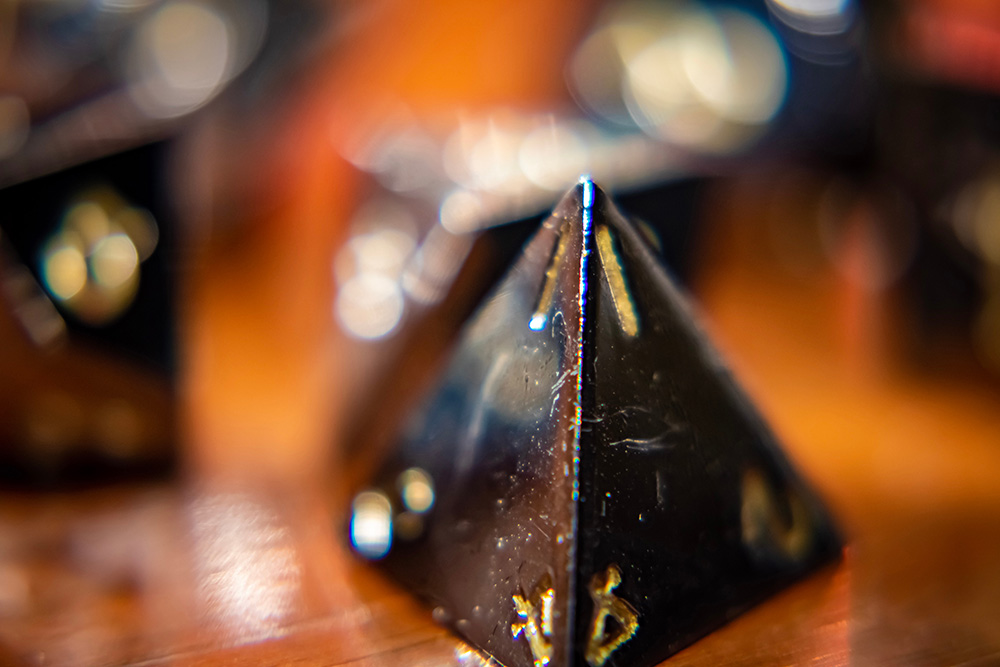 5. The d12 is perhaps the most underused dice in D&D

While some may argue that the d8 and the percentile d10 are underutilized, the d12 is probably used less frequently in fifth-edition Dungeons & Dragons than the other six dice in a standard set. However, the barbarian class uses a d12 for hit points and for attack rolls with certain weapons while under the effect of rage, and the d12 is also used for some higher-level abilities, magic items, tables, and monster attacks and abilities, so it's not completely neglected by any means!

6. Few games make use of the full set of seven polyhedral dice

Even though polyhedral dice and 7-piece dice sets have been popular and collectible for nearly 50 years, there are surprisingly few games – other than role-playing games – that make use of this full range of dice. So we decided to provide one for free! The rules for the dice game Against the Monstrous Horde are available to view and download right here on our web site, and all you need to play are some polyhedral dice which you probably already own!

When Dungeons & Dragons was first released, character stats (Strength, Dexterity, Constitution, etc.) were generated by rolling three 6-sided dice for each stat and going with whatever result you ended up with on the first roll. Not only that, but the scores were rolled in order. So the result of your first roll automatically went to Strength, the second to Dexterity, the third to Constitution, and so on. Yes, that meant you could end up with an incredibly low score in one or more of your stats. Ever played a character with a Strength of 4 or a Charisma of 5? It might be challenging, but it certainly would make for some interesting role-playing opportunities!

Unlike the early days of D&D, there are now thousands of different styles and colors and types of dice available, and collecting dice has never been easier or more popular. While there are many different reasons to collect dice, generally it is not because of their inherent value or because of their rarity. Most dice collectors enjoy the hobby simply for the joy of discovering and owning these beautiful and interesting objects, and displaying and sharing them with friends and family.