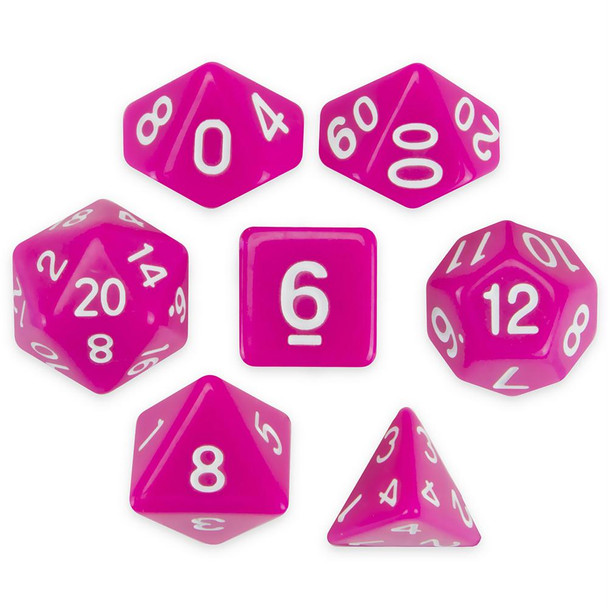 You’ve heard tales of magical fruit from a few choice villagers, telling tales of ripe berries bursting with chaotic magic. Dragonberries. The story was just too good to pass up, and your trek into the far wilderness has been unsuccessful so far. But now you stand face to face with what simply must be what the villagers spoke of. The bush seems to radiate with energy, and the berries growing ripe from its branches are fat and pink. You reach for one and it plucks easily from its perch. It bursts between your teeth, ripe and juicy, and not but a moment after you swallow the remains you begin to feel strange. Magic courses through your blood, and you know the stories were true!

While not actually edible, the Dragonberry dice set holds this same vibrant pink energy as the magical berries, and it's ready to unleash its powers in your next D&D game!

Each 7-piece set comes with the following dice:

MSRP:
each Now: $3.06 - $3.85
Was:
Blue is a classic color. These dice may look simple but their versatility is limitless. Are they the waves of an ocean, crashing endlessly against the shore? An open sky, bursting with clouds?...

MSRP:
each Now: $3.06 - $3.85
Was:
Who doesn’t love purple? These beautiful dice could be just what you need to tie your character all together: The shimmer of a powerful spell as it’s first cast. The crushed velvet of a queen’s gown...

MSRP:
each Now: $6.98
Was:
Skystone is a rich turquoise-blue hue that is as ethereal as the jeweled skies from which they were dropped. Each 16mm 7-piece set comes with the following dice: 1 4-sided die 1 6-sided numeral die...

MSRP:
each Now: $6.98
Was:
These dice are straight from a white hot forge. The dying embers still flickering when the blacksmith is done for the day and the forge is cooling. But in your hands these embers will never die. Each...

MSRP:
each Now: $7.98
Was:
"I cast Faerie Fire!" Each of your rolls will be advantageous with stunning dice like these. Vibrant magenta with brilliant gold numbering, even in low light you won’t lose track of these...

MSRP:
each Now: $32.99
Was:
Never Borrow Dice Again! Adding to the legacy of the Wiz Dice Bag of Holding and Bag of Devouring comes the Bag of Tricks. Inspired by the classic Crown Royal bag with a wide bottom panel and...

MSRP:
each Now: $6.98
Was:
Ghost Jade looks like an ethereal semiprecious stone from another plane with an evanescent mint hue. You best start believing in ghost stories, adventurer. You're in one! Each 7-piece set comes with...

MSRP:
each Now: $7.98
Was:
The stars above you twinkle, and looking up you can gaze into the brilliant vastness of the cosmos. Spinning galaxies, glittering stars, distant quasars, and the ever shifting beauty of a nebula...

MSRP:
each Now: $6.98
Was:
Blighted Grove is a rich hunter green color that is as enchanting as the vast & rolling hills in fantasy lands far away. Each 7-piece set comes with the following dice: 1 4-sided die 1...

MSRP:
each Now: $8.80 - $9.59
Was:
With a spark, Faerie Fire erupts from your fingertips, bathing every living being in the room in an otherworldly glow and making them shimmer in the darkness. Get an advantage on every roll you make...

MSRP:
each Now: $6.98
Was:
The night seems to stretch on forever. The dark, misty grey sky swirls endlessly above your head. Not even a twinkle of starlight breaks through the unrelenting mist. The soft fire from the middle of...

MSRP:
each Now: $6.98
Was:
Sticky Ichor is an electrically charged green, ready to shock you with the force of the heavens. Each 7-piece set comes with the following dice: 1 4-sided die 1 6-sided numeral die 1...