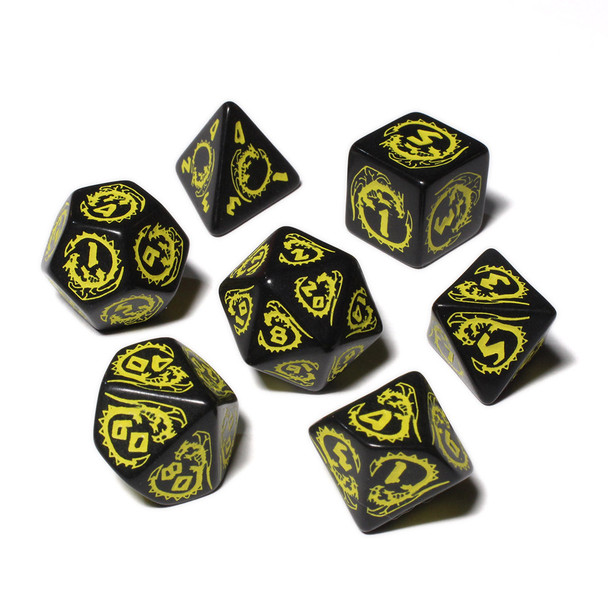 There is nothing quite as majestic as a golden dragon. The most regal and elegant of the metallic dragons, the sight of one flying across the sky is one of the most graceful sights to behold. Strong believers in good and order, these dragons make powerful allies. They do not care much to fight, instead preferring to try and use intimidation to buy time to cast spells. But should they be provoked, they have powerful fire magic that rivals even the mighty red dragon.

These dice are imbued with all the shimmering grace of a golden dragon. With bold yellow numbering and intricate draconic illustrations, they will surely be a standout at the game table.

This set contains the following dice:

MSRP:
each Now: $0.34
Was:
A sturdy, bright yellow die with squared corners and indented black painted dots. Excellent manufacturing quality. Measuring in at 16mm, this is the most common size of dice. Also sold in bulk...

MSRP:
each Now: $3.06 - $3.85
Was:
Talk about bold! No one’s going to miss you taking a roll with these dice. They stand out in a brilliant, shocking yellow. Golden coins, sparking electricity, the burning light of the sun -- these...

MSRP:
each Now: $5.98
Was:
If you are a hard-core gamer, collect dice, need dice for a school project, fundraiser or other event, this pack of seven polyhedral dice in opaque yellow is the perfect solution. Each set comes with...

MSRP:
each Now: $13.95
Was:
White dragons are well known for being the smallest of the chromatic dragons, but their size should not be underestimated. Their icy breath can freeze any foe, and their incredible memory means they...

MSRP:
each Now: $13.95
Was:
Red dragons are truly a classic beast. The largest of the chromatic dragons, fearsome and cruel, caring not for others and instead only for their own vanity and hoard. To them, they are the pinnacle...

MSRP:
each Now: $26.99
Was:
This dragon is truly like no other dragon you’ve seen before. Its scales are swirled with purples and blues and whites, a symphony of colors all shimmering in the light. Its eyes glitter as it...

MSRP:
each Now: $26.99
Was:
The dragon’s nest is a sight to see -- mountains of gold and treasures guarded by a massive, resting beast. Overwhelmed, as you look upon the endless piles of treasure, a glitter catches your...

MSRP:
each Now: $26.99
Was:
A most elusive creature is the rare Woodland Drake. Those who see one consider themselves rather fortunate, as it is said the sighting of one brings good luck. It is only legend, but it is said their...

MSRP:
each Now: $9.25
Was:
Orion, a brilliant constellation in the night sky. A renowned hunter and now a silent guardian in the cosmos, this dice set is close to holding that bit of the heavens in your hands. These are...

MSRP:
each Now: $0.34
Was:
A sturdy, bright yellow die with squared corners and indented black painted dots. Excellent manufacturing quality. Measuring in at 16mm, this is the most common size of dice. Also sold in bulk...

MSRP:
each Now: $0.34
Was:
A bright white, high-quality die with dark black spots. Squared corners with indented painted dots. A favorite size and shape among tabletop gamers of all types, 16mm is the most common size of dice.

MSRP:
each Now: $0.26
Was:
A solid red die with squared corners and white spots. The 12mm size makes it easy to roll in a small space, but it's plenty big enough to be used for all kinds of games or other dice-related...

MSRP:
each Now: $0.18
Was:
A round-cornered, solid white die with dark black spots. At 1/2" in size, this die is a bit smaller then a typical 16mm die. Also sold in bulk quantities! Contact us for pricing and additional...

MSRP:
each Now: $9.25
Was:
Andromeda, a portion of Earth’s brilliant night sky. Andromeda, beautiful wife of Perseus, placed alongside her husband in the glittering stars. A watcher of this eternal cosmos. And these...

MSRP:
each Now: $0.34
Was:
A bright green die with squared corners and indented white painted dots. The manufacturing quality on these dice is exceptional. A favorite size and shape among game players, this die measures 16mm...