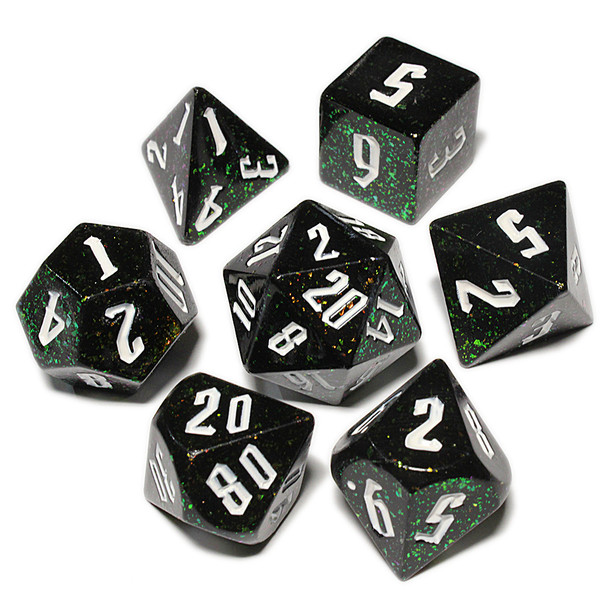 Within the dark halls and rooms of the ancient castle, the remnants of old magic and glimmering portals to elsewhere still hang in the dusty air...

Are you looking for a dice set to compliment a particularly gloomy character? A gothic, dramatic campaign? Someone fashionable in black? These dice are a sleek black, with easy-to-read, stylized white numbers. But when they catch the light they magically erupt in sparkles of green, gold, and orange.

Each set contains the following dice:

MSRP:
each Now: $10.70 - $11.49
Was:
You stand in the mountains at the base of a massive cliff. Before you is the mouth of a cavern, and you find yourself holding your torch aloft and staring deep into its maw. As you gaze into the...

MSRP:
each Now: $10.70 - $11.49
Was:
The dragons scales shimmer in the torchlight. Ivory claws flexing against piles of gold and gemstones. Its eyes are closed, deep within slumber. A ruby red glitter catches your eye -- the shimmering...

MSRP:
each Now: $7.98
Was:
If you are a hard-core gamer, collect dice, need dice for a school project, fundraiser or other event, this pack of seven polyhedral dice in glittery marble blue is the perfect solution. Each set...

MSRP:
each Now: $7.98
Was:
The cosmos is endless, but the night sky isn’t quite as imposing. The deep black of onrushing night seems as if it might engulf the world at first -- but oh how the beauty of the night truly shows...

MSRP:
each Now: $7.98
Was:
If you are a hard-core gamer, collect dice, need dice for a school project, fundraiser or other event, this pack of seven polyhedral dice in jade is the perfect solution. Each set comes with one 4...

MSRP:
each Now: $26.99
Was:
The dragon’s nest is a sight to see -- mountains of gold and treasures guarded by a massive, resting beast. Overwhelmed, as you look upon the endless piles of treasure, a glitter catches your...

MSRP:
each Now: $9.25
Was:
Andromeda, a portion of Earth’s brilliant night sky. Andromeda, beautiful wife of Perseus, placed alongside her husband in the glittering stars. A watcher of this eternal cosmos. And these...

MSRP:
each Now: $0.30
Was:
This high-quality die black die has squared corners with indented white painted dots, making it exceptionally easy to read even at a distance. A favorite size and shape among game players. Measuring...

MSRP:
each Now: $26.99
Was:
This dragon is truly like no other dragon you’ve seen before. Its scales are swirled with purples and blues and whites, a symphony of colors all shimmering in the light. Its eyes glitter as it...

MSRP:
each Now: $9.25
Was:
Orion, a brilliant constellation in the night sky. A renowned hunter and now a silent guardian in the cosmos, this dice set is close to holding that bit of the heavens in your hands. These are...

MSRP:
each Now: $0.30
Was:
Bright red high-quality die with squared corners and indented painted white spots. A favorite size and shape among game players. Measuring in at 16mm, this is the standard size most commonly found in...

MSRP:
each Now: $4.99
Was:
Ideal for carrying your dice, accessories and other treasures! This black leather bag features a hide-like texture and a subtle skull motif. Measures 5 by 3 inches in size, big enough to hold four...

MSRP:
each Now: $0.30
Was:
Bright blue high-quality dice with squared corners and indented white painted dots. A favorite size and shape among game players, this is the standard size most commonly found in board games.